On writing with a fountain pen: a review of the Kaweco Sport

The pen that I'm holding in my hand is the Kaweco Sport. I found it a few years ago while walking in Chicago one afternoon and happened to pass the Palmer House, where Andersons Pens had dozens of fountain pens on display in its windows. 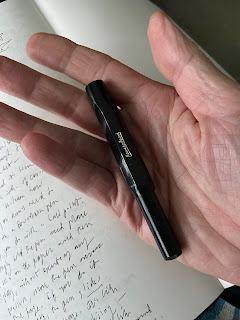 Until then I'd been experimenting with less expensive pens (in the $10 range), mostly a variety of Pilot pens (Kakuna) made in Japan, and, though I liked writing with them, I felt it was time to take a step up (but not too big a step) and see if using a slightly more expensive pen might make a difference in the way it felt to write.

So, I entered Andersons, a bit overwhelmed by the many pens displayed in the showcases. The colors, the shapes, the glitter of gold and silver nibs--it felt like I'd entered one of the exhibition rooms at the Art Institute down the street.

As I looked into each display case, I felt as if I was admiring the work of skilled sculptors, master craftsmen whose work reflected a belief in the marriage of function and beauty.

A salesman came over to show me a few pens. He took the Lamy Safari out of the case, then moved on to the Pilot Metropolitan, and offered a few others, most way beyond my price range, but it was this Kaweco that caught my eye.

Almost immediately I liked the pen's sleek black lines, its octagonal shaped cap, and its gold nib. It looked like the pens that I'd imagined writers using in the 1920s and 1930s, years before ballpoint pens became popular. I admired its size, too, small and compact, so it could fit in my pants pocket and I'd be able to take it on travels without fear of losing it.
What I found especially pleasing was the screw-on cap. It turned so smoothly and precisely, and it gave the pen the feel of a having been made by a skilled craftsman. In addition, the cap, when posted on the barrel, fit snugly in my hand and provided a little extra width of comfort on the upper half of the barrel, unlike the lower half where my fingers gripped the pen below the cap.
So, I bought it -- the first fountain pen that I bought for more than $20 -- and since then I've found it to be a reliable pen, the ink flowing smoothly each time I use it, the same snug comfort each time I hold it after posting the cap on the barrel.

One of the pleasures that I've found writing with this fountain pen--with most fountain pens, actually-- is the way my hand relaxes while writing.

I don't need to grip the barrel tightly. I don't need to press down firmly the way writing with a ballpoint pen requires a writer to exert pressure on the page. 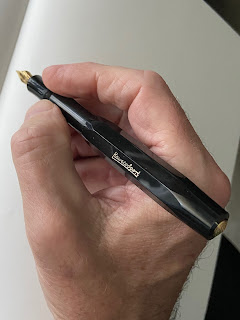 It's a relief to simply hold the pen between my thumb and index finger, place the nib on the paper, and lightly move the pen across the page.

If you've never written with a fountain pen before, you'll be surprised by the way the pen feels like its gliding across the page.

There are moments when my hand doesn't feel like it's touching the page.

Of course, you don't need to spend a lot of money on a fountain pen if you want to try one. There are models available for under $20, some as inexpensive as $5 and less.

You can find them online here and here, or visit Andersons the next time you're in Chicago (or shop at their online store here). 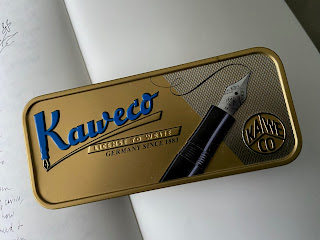 Posted by Bruce Black at 7:30 AM No comments:

If you'd like to search the blog by subject, check out the list at the bottom of the page.

Wordswimmer is honored to find itself listed as one of the best online creative writing blogs for 2018. There are lots of terrific blogs on writing at this site:
https://www.bestvalueschools.org/best-creative-writing-blogs/
Hope you'll find one that'll help you keep putting words on paper.

Many thanks to Blue Lyra Review for sharing my essay about mourning my father in the first month after his death:
http://bluelyrareview.com/tag/bruce-black/

Many thanks to Elephant Journal for sharing my essay on how yoga helps with uncertainty and disappointment: http://www.elephantjournal.com/2016/11/how-yoga-helps-with-uncertainty-disappointment/

Thanks to the editors of Dogs Naturally Magazine for sharing my story, "What A Dog Can Teach Us," in the September-October, 2015 issue.

Chicken Soup for the Soul

The 5 Blessings of Keeping a Journal

Many thanks to MindBodyGreen.com for sharing my thoughts on the benefits of keeping a journal:
http://tinyurl.com/cum67tn

I'm pleased to announce that I've been invited to share thoughts about writing and yoga as a Contributing Expert on Yogamint's website.

Here's a link to the first in a series of four articles that will appear on the website over the coming year:

I hope you'll find the articles helpful as you swim into new territory in the months ahead.

Many thanks to Constance Molleda for her kind review of Writing Yoga in the Spring, 2012, issue of Yoga International: http://tinyurl.com/bnxx5kf

Many thanks, LA Yoga Magazine

Thanks LA Yoga Magazine and Jazmine Green for including Writing Yoga in this article on inspiring yoga books: http://tinyurl.com/7u3yo2d

I'm grateful to Elephant Journal.com and Brooks Hall for sharing this review of Writing Yoga.

A Review in The Writer Magazine

Thanks to The Writer Magazine and reviewer Kristin Sutter for the generous review of Writing Yoga in the November issue: http://tinyurl.com/3j3ge4s

Thanks, Yoga Journal, for including Writing Yoga on a list of good books to read this summer. You can see the list here: http://tinyurl.com/6ej9b86

If you'd like to read an interview with Bruce Black about his book, Writing Yoga, swim over to Shivers Up The Spine, an online journal for yoga practitioners, teachers, and writers, and take a look:

Many thanks to writer, yoga instructor, and dancer Priya Thomas for her thoughtful questions about writing, yoga, and life.

Anne Mazer, author of The Salamander Room, the Amazing Days of Abby Hayes series, and co-author with Ellen Potter of Spilling Ink: A Young Writer's Handbook, reviews Writing Yoga on her blog:

Michelle Edwards, illustrator and author of A Knitter's Home Companion, reviews Writing Yoga on her blog:

An article about Writing Yoga appears in The Jewish News of Sarasota-Manatee (March, 2011):

You know that feeling when you're riding a wave and feel lighter than air and never want the wave to stop?

That's how I feel after hearing from my editor at Rodmell Press that my book, Writing Yoga, is now available.

It's not the same kind of exhilaration that comes from writing and discovering unexpected treasures in deep water.

But it's a remarkable feeling, all the same, knowing that words which started off as mere flickers in my journals are making their way into the world.

And if you'd like to read more about the book, check out these links:

Thanks so much to all for your support and encouragement.

"Pour yourself like a fountain. Flow into the knowledge that what you are seeking finishes often at the start, and, with ending, begins."
-- Rainer Maria Rilke
"Work from pithy middle eye out, swimming in language sea."
-- Jack Kerouac
"Man cannot discover new oceans unless he has the courage to lose sight of the shore."
-- Andre Gide
"Delay is natural to a writer. He is like a surfer—he bides his time, waits for the perfect wave on which to ride in."
-- E. B. White

"I want my reader to fall into what I've written like falling into water, to go down and down and down, to enter that underwater universe, to be transformed, to breathe like a sea creature, effortlessly slipping and sliding and swimming, a fish among fish."
-- Norma Fox Mazer

"All good writing is swimming under water and holding your breath."
--F. Scott Fitzgerald in a letter to his daughter.

"If a writer knows enough about what he is writing about, he may omit things that he knows. The dignity of movement of an iceberg is due to only one ninth of it being above water."
--Ernest Hemingway

"You can't cross the sea merely by standing and staring at the water."
--Rabindranath Tagore

"For true love is inexhaustible; the more you give, the more you have. And if you go to draw at the true fountainhead, the more water you draw, the more abundant is its flow."
--Antoine de Saint-Exupery

How often have you heard people say that writing can't be taught?

Yet writing is a craft that all of us have learned.

And if we're lucky, we've had a teacher who inspired us to spend a lifetime putting words on paper, a teacher who taught us to explore our minds and our hearts.

Do you remember the teacher who inspired you to write?

Why not share a brief story about him or her with other wordswimmer readers?

Join these writers who have kindly passed on their teacher's gift of inspiration:

Send your stories (250 words), along with a brief bio, to wordswimmer, and we'll take a look and post them as part of our effort to honor our writing teachers.

Write to Bruce at wordswimmer@hotmail.com.

An updated list for 2012 of "The Top 100 Creative Writing Blogs" includes Wordswimmer.
Thanks to the editors at Bestcollegesonline.com for including us in the "Improving Your Craft" category.
Thanks to all our contributors and readers who helped us find our way onto this list.

If you'd like to wade through Wordswimmer's past postings, you'll find a Subject Index at the bottom of this page.

Thanks for stopping by.

Are you having trouble getting into the water or finding your rhythm? Confused over which direction to swim in? An online tutorial or workshop can help you dive into the water and swim at your own pace toward a new understanding of your story.

Bruce Black
Sarasota, Florida, United States
A writer, editor, and teacher, Bruce Black earned his MFA in writing from Vermont College of Fine Arts and now searches for words and stories on Florida's west coast, only a few miles from the Gulf of Mexico. His book for adults, Writing Yoga, was released in 2011, and his stories for children have appeared in Cricket and Cobblestone magazines. You can contact him at wordswimmer@gmail.com.

Unauthorized use and/or duplication of this material without express and written permission from Bruce Black is strictly prohibited. Excerpts and links may be used, provided that full and clear credit is given to Bruce Black and "Wordswimmer" with appropriate and specific direction to the original content. Write wordswimmer@gmail.com for questions about permissions.